Biophysical chemistry of proteins, nucleic acids and their interactions

We study the self-assembly and function of proteins, nucleic acids and their complexes, using a wide range of biophysical and biochemical methods including fluorescence, circular dichroism, calorimetry, osmometry, and gel electrophoretic separations of 32P-labeled nucleic acids, quantified by phosphoimager analysis.  Graduate students from IPiB, Biophysics and Chemistry and the undergraduates they mentor have made significant contributions to understanding the energetics and mechanism of protein folding, DNA helix formation, and the binding of E. coli RNA polymerase and transcription factors including lac repressor, IHF, and HU to DNA. A common theme of these self-assembly processes is how sensitive their energetics and kinetics are to salt and solute concentration and other solution conditions, and therefore we have also studied the many differences between the cytoplasmic environment of E. coli and in vitro conditions. We also determine how common biochemical solutes like urea, amino acids, glycine betaine, the series of oligo- and polyethylene glycols, and salts from the Hofmeister series interact with other solutes and with biopolymers, and use this information to predict of interpret their effects on self-assembly and other biochemical processes, as well as to quantify the atom-atom noncovalent interactions responsible for these effects.

Initiation of transcription begins with site-specific binding of RNA polymerase, directed by the specificity subunit σ70, to promoter DNA to form an initial closed complex (RPc).  RNA polymerase in this closed complex functions as a biophysical machine, directed by its interactions with the promoter DNA sequence.  This machinery bends the duplex into the clamp and cleft of RNA polymerase and then uses strand binding free energy to opens the duplex and place the start site base in the active site at the base of the clamp.  Wrapping of upstream promoter DNA on RNA polymerase is needed for these downstream processes to occur efficiently, and we are using fluorescence (FRET, PIFE) assays and binding assays with 32P detection to determine the role of DNA wrapping and the kinetics and mechanism of open complex formation.  Different promoter sequences result in up to 104-fold differences in the rate of open complex formation. 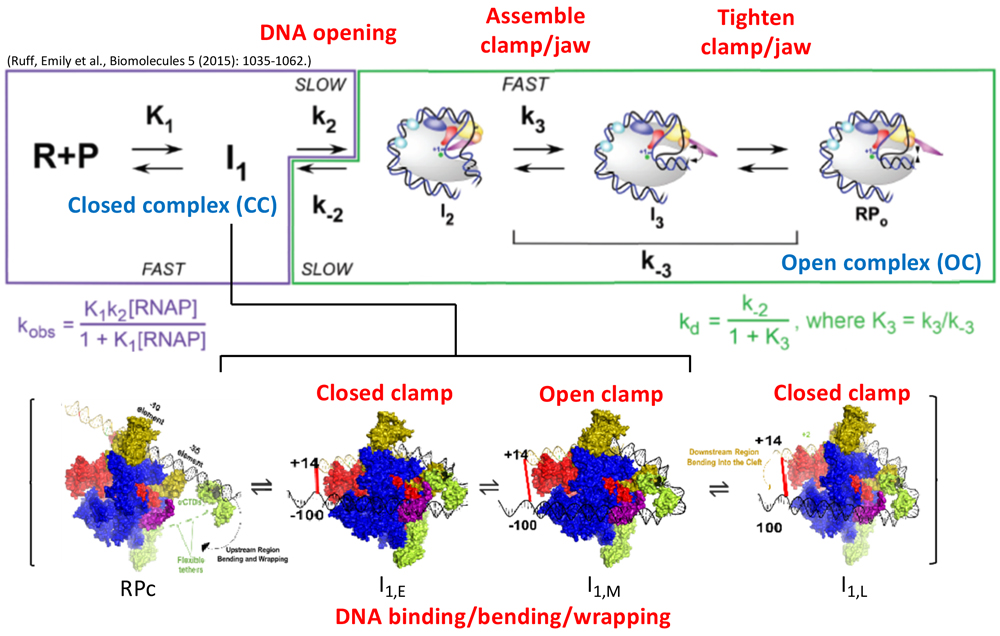 After formation of the initial open complex, RNA polymerase is directed by a downstream sequence element called the discriminator to stabilize the open complex by up to 104-fold by changes in interactions of mobile elements with the downstream duplex.  We are investigating how the stability of the open complex affects the ability of RNA polymerase to initiate transcription upon addition of NTP, and to escape from its contacts with the promoter, release σ70 and transition to the elongation mode of transcription. Using rapid-quench mixing with gel electrophoretic separations of 32P-labeled short and long RNA transcripts, quantified by phosphoimager analysis, we are determining the kinetics and mechanism of the steps of initiation and the buildup of translocation stress as the RNA-DNA hybrid moves into the clamp, which is used to break interactions and drive escape.

Interactions of Solutes and Hofmeister Salts; Effects on Protein and Nucleic Acid Processes

Hydrogen bonding of amide N and O atoms, nonpolar C-C interactions like the hydrophobic effect, coulombicinteractions of cationic N and anionic O groups and other interactions of C, N and O atoms all contribute to specificity and stability of protein assemblies and interactions in water.  For protein interactions with large interfaces, these individually-small but collectively large contributions have proved difficult to separate and quantify experimentally. The thermodynamic consequences of these atom-atom interactions can be quantified for small solutes, however, and dissected into individual solute-atom and atom-atom contributions in an analysis based on their accessible surface area (ASA) and the observation that for small solutes these interactions make additive free energy contributions. Studies of solute-model compound interactions allows solute-protein and solute-nucleic acid interactions, as well as solute effects on protein-nucleic acid interactions, to be predicted or interpreted in terms of ASA and ASA changes in these processes.  As examples, we recently interpreted effects of chemical denaturants urea and GuHCl on the kinetics of protein folding and unfolding to deduce the properties of the highest free energy transition state and conclude that it has as much secondary structure (helix, sheet) as the folded protein.  From measurements of the effects of stabilizing and destabilizing solutes on the kinetics of forming and dissociating the lac repressor-lac operator complex, we deduced the structure of the transition state in which the DNA binding domains (DBD) of repressor contact operator DNA, and in which folding of the tethers that connect these DBD to the core repressor is nucleated but incomplete.  Ongoing projects involve the use of solutes to probe the conformational changes in the steps of open complex formation, stabilization and initiation, and promoter escape by RNA polymerase.  We also are attempting to dissect atom-atom interaction free energies into enthalpic and entropic contributions.

Graduate students from IPiB, Biophysics and Chemistry and the undergraduates they mentor are conducting this research. The broad range of backgrounds and interests of these students has been a key factor in our research successes and contributes to a stimulating research environment. Many of my students have gone on to academic positions in chemistry and biochemistry departments; many others are engaged in research at chemical, pharmaceutical and biotechnology companies.

Plaskon, Henderson et al, “Kinetic-Mechanistic Evidence for Which E. coli RNA Polymerase-λPR Open Promoter Complex Initiates and for Stepwise Disruption of Contacts in Bubble Collapse” is now available in BioRxiv https://biorxiv.org/cgi/content/short/2020.09.11.293670v1.  This research reveals that, surprisingly, the stable 37 °C λPR open complex (RPO) is incapable of initiation. Instead I3, the late open intermediate in RPO formation, is the lPR initiation complex, and RPO must convert to I3 to initiate. We find I3 is the primary lPR open complex below 25 °C.  We also find that stepwise disruption of RNAP contacts with the discriminator and -10 regions of the open strands of I3 in initiation is accompanied by extensive base stacking in these strands, a type of stepwise bubble collapse that regains much of the stability of the duplex without the twist stress of duplex formation.

Publication in PNAS 2020:  “Experimentally Determined Strengths of favorable and Unfavorable Interactions of Amide Atoms Involved in Protein Self-assembly in Water” by Cheng et al., [PubMed] is also available on the BioRxiv server at https://www.biorxiv.org/content/10.1101/2020.05.26.104851v1.  Quantitative information about strengths of amide nitrogen-amide oxygen hydrogen bonds and π-system and hydrophobic interactions involving amide-context sp2 and/or sp3 carbons is needed to assess their contributions to specificity and stability of protein folds and assemblies in water, as well as to predict or interpret how urea and other amides interact with proteins and affect protein processes. Here we obtain this information from thermodynamic measurements of interactions between small amide molecules in water and a novel analysis that determines intrinsic strengths of atom-atom interactions, relative to water and per unit area of each atom-type present in amide compounds. These findings allow prediction or interpretation of effects of any amide on protein processes from structure, and may be useful to analyze protein interfaces.

For a full list of publications, see the Publications Page for the Record group.